Following up on last night's re-review, I'd like to add one more thread to the conversation about cult cinema. The "midnight movie" isn't exactly dead; while it is true that the advent of VCRs functionally killed Drive-Ins and seriously crippled the need for midnight cinema, in the years since Midnight Movies: From the Margin to the Mainstream, a concerted effort exists in cities across the U.S. to bring back the experience - as the oft-mentioned Best Worst Movie covers in reference to Troll 2. One could argue that The Rocky Horror Picture Show itself disproves the myth that "midnight movies" ever died in the first place. For as long as I've been alive, The Rialto screened (and screens) Rocky Horror every Friday at midnight, and it sells out every week. Its presence on Glee edged the film further into "mainstream," but its unabated presence as a "midnight movie" throughout the country.

Speaking of the Glee episode, one would be tempted to say that the "everything old is new again" maxim is reaching a breaking point when the ultimate "midnight movie" gets a glee club treatment, I would like to point out that this is not dissimilar to the Elgin and the Orson Welles Theatre trotting out Reefer Madness and Freaks to exploit their "camp" value for a new generation in the 1970s.

Despite the fact that nobody is going to pay the Cap'n for mentioning this (which is, in its own way, my disclaimer for what follows), fans of the Criterion Collection with limited budgets may be happy to learn that over a hundred titles are available on Netflix's "Watch It Now" streaming service. While you won't get the supplements, it is a much cheaper way to see Children of Paradise, Man Bites Dog, Tokyo Drifter, Cronos, The Battle of Algiers, Onibaba, Night and the City, Jules and Jim, The Life and Death of Colonel Blimp, Ikiru, Pandora's Box, The Spirit of the Beehive, La Strada, Solaris, Elevator to the Gallows, General Idi Amin Dada: A Self Portrait, The Hit, Shadows, and The Passion of Joan of Arc.

I mention this because the aggregate prices for just the films listed above is around $700 without tax, whereas you can watch unlimited streaming for $7.99 a month. Again, I'm not getting kick backs from anybody, but it's worth putting out there to frugal cinephiles or Criterion fans. Think of it as a way to buffer your knowledge of the collection without killing your wallet - something that weighs heavily on my mind right now.

Finally, I just want to say "How cool is this?" 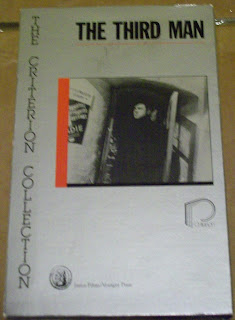 A friend of the Blogorium picked this up for me at a thrift store, and because I thrive on discovering things I didn't know, learning that the Criterion Collection also existed on VHS, in addition to Laserdisc, DVD, and now Blu-Ray. 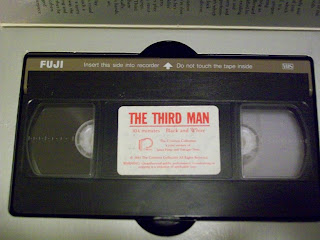 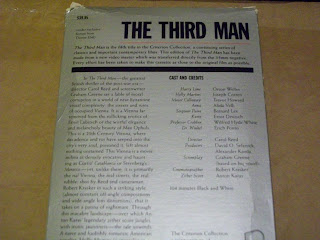 What I find very intriguing as a Criterion fanatic is that according to the information on the back and the number on the Spine, The Third Man is number 5. A cursory search online is coming up with virtually no information on Criterion's VHS output (their site no longer lists the Laserdiscs, which included Taxi Driver and The Magnificent Ambersons), so if any readers out there finds something, I would greatly appreciate more insight into this heretofore unknown facet of the collection.
Posted by Cap'n Howdy at 6:26 PM