I like westerns. I like movies about alien invasions (usually). I like Daniel Craig, Harrison Ford, Olivia Wilde, Sam Rockwell, Paul Dano, Clancy Brown, Walton Goggins, and Keith Carradine. I like almost all of Jon Favreau's films (I haven't seen Elf or Made). On paper, this concept can't lose - you've got cowboys, and you've got aliens. Aliens are attacking cowboys. Cowboys don't know what they are, because they've never seen flying machines or armband laser guns or you know, anything that might register on some level if this move took place after the 1800s. So what happened? 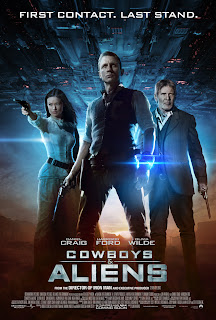 Jake Lonergan (Craig) wakes up in the middle of the desert with no memory of how he got there. His only souvenirs are a wound to his abdomen and a strange metal bracelet on his arm. He wanders into town, where a preacher (Brown) patches him up. While having a drink at the local saloon, Parcy Dolarhyde (Dano) starts harassing bartender Doc (Rockwell) and shoots a deputy when Sheriff John Taggart (Carradine) tries to maintain order. Percy is the son of Colonel Woodrow Dolarhyde (Ford), a rancher who practically owns the town, so when the Sheriff arrests Percy, he rides into town to take him back. When Dolarhyde is informed that Lonergan (who was a wanted man and was also arrested) is with him, he decides he'll take both of them back. And then the sky lights up... aliens attack, burning the town and capturing friends and loved ones. Lonergan, Dolarhyde, and the surviving townspeople band together to track the "demons" down, with the help of mysterious stranger Ella Swanson (Wilde), but will they find them before it's too late?

More importantly, will anyone still be paying attention? I found myself drifting away from the screen repeatedly as Cowboys & Aliens wore on, growing impatient with the unnecessary side trips and phony "character development" for people who don't really change at all during the course of the story. I was a little flabbergasted that Cowboys & Aliens is such an anemic, lifeless affair. All of the right pieces seemed to be in place, but the end result is so underwhelming. Almost nothing about the film works.

Cowboys & Aliens has five credited screenwriters (Roberto Orci, Alex Kurtzman, Damon Lindelof, Mark Fergus, Hawk Ostby) and "screen story" credit (Steve "yes, the 'Thumb' guy" Oedekerk) before we get to the "based on" credit for Scot Mitchell Rosenberg's graphic novel, which has to have something to do with why this movie is so slapdash. Let's take a look at our two... "protagonist"s as examples of why nothing ever means anything in the film.

Starting with Daniel Craig's Jake Lonergan, a character who doesn't remember anything. He's a wanted criminal who apparently did something bad, but he can't remember it, so there's no reason to care what the mystery was. Even when we discover what he did (rob a carriage and rip off his criminal associates to start a life with his new love), it doesn't seem to be such a bad thing. In the flashback when he realizes what happened to the gold and his lover, she's chastising him for stealing it. He did it to make their lives better, blah blah blah. Anyway, so even when we know what Jake did, he's still been behaving heroically up to that point and his "crime" appears to be altruistic, if misguided.

From that point forward, Jake doesn't change ANYTHING he does. At first you think he might go back to his gang (actually, you don't, but at that point in the film it's getting boring so we need more laser fodder) but instead they just leave and continue going about their "rescue" mission. Later, when they find the ship, and Lonergan leaves to do... something, there's a big to do where Dollarhyde gets angry at Jake for abandoning them. Except as an audience member, I KNEW he wasn't abandoning them. Why? Because as hard as Cowboys & Aliens tries to cram this "redemption" theme down our throats, Jake Lonergan never once behaves like a man that's going to leave the rescue mission "high and dry." There's not a hint of moral ambiguity in his actions, even though we're told repeatedly about the terrible things he did.

Harrison Ford's Colonel Woodrow Dolarhyde is even more of a mess, because there's no real redeeming to be done. He starts the film as a gruff jerk and ends the film as a slightly less gruff jerk, but the character himself doesn't have an arc. It's evidenced by the fact that the gaggle of writers keep throwing subplots at Dolarhyde to trick you into thinking that his character does anything more than conveniently turn "heroic" in the last act

There's the "two sons" subplot with Percy and Nat Colorado (Adam Beach), his not-actually-son-but-might-as-well-be-since-he's-a-better-son-than-Percy; there's his hatred of the government, his interactions with Emmett Taggart (Noah Ringer) where he gives the kid a knife and tells him to "grow up" which have no actual bearing on how the boy uses a knife to kill an alien later; there's his distrust of the Apache chief and warriors because he doesn't trust Native Americans but he works with them anyway and I guess it's okay because they're friends or something. Oh, and I forgot the thing with the doctor that Dolarhyde thinks serves no purpose but then Sam Rockwell learns to shoot just in time to save his life. All of these are subplots which a) go nowhere, or b) have very little to do with Dollarhyde until the script ABSOLUTELY needs a reason for Dolarhyde to appear "heroic" or "humble." The character's arc is built around contrivances, many of which don't directly involve him until Ford is needed to do something. You'd be surprised how much of the film is spent with Harrison Ford in the background reacting to other people.

I can't say that I cared about much of anything that happened in Cowboys & Aliens, from the cardboard cutout characters to the story that fails as a western and as a science fiction film (let alone a mashup of the two). I didn't care why the aliens wanted gold, so the half-assed "it's as rare to them as it is to you" explanation bounced right off of me. By the time Ella dies and comes back to life, revealing herself as another alien, I had already checked out. The aliens are bug-eyed hulks with claws that kill things so quickly one ought to wonder why they'd need laser cannons and arm blasters. I say "ought" because by that point in the film, I no longer cared.

Cowboys & Aliens isn't interesting enough to keep your attention from wandering, not odd enough to keep you invested in anything, nor pulpy enough to overcome its ho-hum story. If you want a movie that delivers Cowboys and Aliens, and nothing else, look no further. You just found something to stare at for two hours. If you expected anything else at all from the movie, be prepared for disappointment. That is, if you still care enough to be disappointed by the end.

For anybody curious, I watched the "extended" edition, which clocks in at 135 minutes (sixteen minutes longer than the theatrical version). Why? Well, I figured if I was going to watch an overlong film that fails to engage viewers from the moment the aliens appear, I might as well see all of it. No sense in wondering what I might've missed out on.
Posted by Cap'n Howdy at 3:55 PM