This one has been a tough nut to crack: on one hand, I really don't want to pile on to a movie almost everybody has been tearing a new one. Because, yeah, it's a mess. Most of it is pretty bad to really, really bad. Some of it is okay, maybe even pretty good, but then structurally it collapses again. On the other hand, there's almost something worth mentioning in Josh Trank's Fantastic Four that I've seen mentioned offhand in a few reviews, but that most people haven't picked up on, or at least discussed in depth. This isn't the first superhero movie that's dipped its toe into Cronenbergian "body horror," but in whatever it's original incarnation was - more on that in a bit - Fantastic Four is definitely the first mainstream comic book movie to have tried to specifically approach an origin story using that pervasive sense of dread.

It's just too bad that we'll never see that movie, if it was ever finished. We will probably never know, at least until an "unauthorized" book comes out in a decade or so. Actually, blog post. I keep forgetting that's the world we live in now, where a book like The 50 Greatest Science Fiction Movies Never Made would now just be a series of articles on some geek friendly site. Anyway, the post-mortem on Fantastic Four is going to make for fascinating reading someday, more so even than the movie that came out of it. Which is, let's be fair, not worth seeing. I'm sorry, but even given what I'm going to tell you, the end product just isn't worth your time. It's not bad enough to be entertaining, and what few moments of interest it has don't amount to enough to make it worth your time. 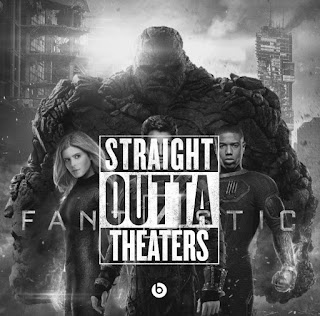 Without getting into the salacious details of what the director did or didn't do on set, or how Fox rushed Fantastic Four into production so as not to have the rights revert to Marvel, let's just say that the production of this film was haphazard. And it shows. If nothing else, there are clear markers of what scenes were reshot because Sue Storm (Kate Mara)'s hair color changes due to a comically mismatched wig she's wearing. It's more prominent later in the film, but you'll see it sprinkled throughout the first half as well. Apparently - and again, other than a deleted tweet from Trank and rumors, we have no real confirmation - Fox saw the completed footage and were shocked that the director of Chronicle was less interested in making a Marvel Audience Pleaser movie and was much more interested in a psychological exploration of what super powers do to the human body and mind. They also allegedly claim the film didn't have an ending, which might explain the embarrassingly bad one cobbled together from every other Marvel film, whether Fox owned the rights to them or not. There is a marked shift from the first half of the film, which at least looks like it was shot in practical locations, to the last 15 minutes, which were clearly shot on a green screen, in order to have a showdown with our heroes and the barely established Dr. Doom.

As I said, that's not really what I found interesting. The final showdown with the giant beam in the sky that manages to steal from X-Men, Thor: The Dark World, and The Avengers (actually, both the first one and Age of Ultron, not that I think about it) is kind of par the course for Marvel movies now. To the point where a comparably small scale fight in a little girl's bedroom makes Ant-Man* a refreshing change of pace. But I digress. Back to the only thing about Fantastic Four that's vaguely worth discussing. There is a moment, in the middle of the film, when Reed Richards (Miles Teller), Johnny Storm (Michael B. Jordan), Ben Grimm (Jamie Bell) and Sue Storm (Mara) are in Area 57, a top secret military facility. They've been exposed to the green goop from Planet Zero, which also swallowed up Victor Von Doom (Toby Kebbell) after they got drunk and used the Quantum Gate to visit the other dimension. It's a long, dumb, story, but basically Government Man (Tim Blake Nelson) wants to take the project away from Dr. Franklin Storm (Reg E. Cathey) and send NASA to the other side. Anyway, I guess it's less dumb to go Ninja Turtles than "Cosmic Radiation".

So they're in Area 57, and Franklin has been given access to visit them. When we first see our heroes, they're in separate, dimly lit rooms, strapped down and totally unable to control their powers. Reed's arms and legs are extended and he can't move his fingers. He doesn't even seem to be aware what's happening. Ben is screaming for help from his darkened cell, embedded in strange rocks from Planet Zero. Johnny uncontrollably bursts into flames, and Sue phases in and out of invisibility. Trank films these scenes to appear as disturbing as this sudden change would be - Reed is sweaty, distended, and horrified. Ben is a giant rock monster, and he's alone with no one to talk to him. Johnny is dangerous to the lab technicians - during a nightmare, he overheats and blows out the glass window they're watching him from behind. For a change, our young protagonists behave the way someone might actually behave if they experienced a radical change to their bodies, and while it might not be what audiences expect from a Fantastic Four movie - let alone Marvel in general - it's a refreshing take on comic book adaptations. This is a far cry from discovering you can stick to walls, or many of the "discovering your powers" montages from other comic book movies. This is all of Brundlefly, all at once - the power and the rotting fingernails. The fear, the loathing, alongside a perverse fascination. Trank does an admirable job of mimicking Cronenberg's fondness for shots that linger on "new flesh," so to speak. For a moment, I thought this might be a movie worth watching.

And then that all falls apart, because of an unusual choice to cut ahead "One Year Later" after Reed escapes, where we're given quick exposition on what their powers are and how they work. The Government has been conditioning their powers to use in combat situations - Grimm first, but they're grooming Johnny to also be a weapon. Were it not handled so poorly, this might be an interesting extension of the creepy shift in approach to being a "super hero," but instead it's underdeveloped, like everything that follows. It's the first hint of the Scanners-like finale we might have seen (again, we'll never be sure), but once they rebuild the Quantum Gate and find Doom is still alive (albeit fused to his suit and glowing green), things quickly collapse. Most of this happens in the last twenty minutes and is rushed, to put it mildly. I'm not sure what part of Doom's powers made him a scanner, but he absolutely walks through the facility making people's heads explode. It's surprisingly violent for a PG-13, even when the lights conveniently cut off.

This extension of Cronenberg inspired body horror is, however, quickly abandoned in favor of a much more conventional "fight it out" ending on Planet Zero with the punching and the fireballs and the invisible force field blah blah Doom sucked into his own portal whatever. Victor Von Doom goes from being a fairly interesting human character - albeit one that resembles the comic book version in no way shape or form - to being evil C-3P0 with scanner powers who decides to destroy Earth so that they can't exploit Planet Zero. We get that from two lines of dialogue before he pops Government Man's head like a zit with brain powers. I'm not honestly sure that Trank's take on the Fantastic Four could have worked for the entire film, or even how he had planned to close out his version of their origin story, but it was different. Admirably different, even: I had heard it was "dark and gritty," which is not exactly something I'd associated with The Fantastic Four, but it's not "dark and gritty" in the way that Batman v Superman looks. Instead, it's psychologically traumatic, drawing from The Fly and Rabid and Videodrome more than Spider-Man or any of the X-Men films.

And yet, we're left with the mess that is Fantastic Four - one pretty good ten to fifteen minute stretch couched between a fairly stupid beginning (really, Dan Castellaneta was somehow Reed's science teacher in elementary and high school?) that cuts ahead to bored actors - Teller and Mara particularly seems disinterested the entire film - and peters out at the tonally incongruous coda. I wouldn't be the least bit enthusiastic about the further adventures of this foursome, even if Bell brings pathos to Ben Grimm / The Thing that makes a talking rock monster not inherently comical. That's an impressive feat, but it's one of a small handful of moments that make Fantastic Four that much worse. Because if it was just awful, like Terminator Genisys, I might even consider recommending it. But instead, there are some tiny, neat, ideas rolled up into a patchwork mess of a movie, one that's just going leave you dissatisfied. So stick with the real Cronenberg, and I guess if you need to see that world collide with comics, there's always A History of Violence...


* Speaking of a movie with its own sordid behind-the-scenes history, albeit one whose seams are much less apparent, and with a much more enjoyable end result.
Posted by Cap'n Howdy at 9:08 PM No comments: